There are three regions of electrical conductivity in plastics; 1) anti-static, 2) electrostatic dissipation (ESD) and 3) electromagnetic dissipation (EMI.) Antistatic applications involve materials that exhibit surface resistivity of 10^12 to 10^6 ohm-cm, ESD applications involve imparting sufficient conductivity to plastics to reduce their surface resistivity to the range of 10^6 to 10^4 ohm-cm. The EMI range is below 10^4 ohm-cm.

Percolation: When used to impart electrical conductivity to plastics, carbon black exhibits a phenomenon known as percolation – where the level of carbon black is sufficient to cause a significant and abrupt increase in electrical conductivity. As the loading of the carbon black in the compound increases, the plastic compound remains initially insulating, as the loading increases the conductivity passes through a sharp and abrupt rise over a very narrow black concentration (loading) range. Further increases in loading past this threshold cause little increase in the conductivity. This narrow range is known as the percolation threshold.

Structure influences conductivity: Carbon black structure, surface area, and loading have significant influences on the compound conductivity.  The Janzen equation, a widely used model, can be used to predict the percolation threshold concentration based on the density and structure (CDBP) of a carbon black.

The conductivity efficiency of carbon black is a function of primary particle size, structure, and porosity. Small particle size blacks have high surface area and higher interaggregate attractive force which result in agglomerates and a pseudo “secondary structure.” Consequently, the pseudo-structure results in higher conductivity than would have been predicted based on the intrinsic structure of the nascent carbon black.  However, this secondary structure can cause a reduction in mechanical property and an increase in melt viscosity.

An ideal carbon black compound for industrial users should have the following desirable attributes:

Considering that ESD conductivity is achieved by creating bridges among the conductive additives, a high quality dispersion is essential to distribute the conductive additives homogeneously within the polymer matrix and maintain the balance of properties desired by the end-use application. Carbon black loadings of over 20% are frequently needed to achieve ESD performance in most thermoplastic resins. At this loading level physical properties of the polymer are frequently compromised, thus, the selection of the right carbon black to impart conductivity but not compromise properties or processing is critical. Skill and knowledge, achieved through years of experience, are essential in developing the appropriate compound for the specific resin and specific end-use application.

Modern Dispersions offers a family of products for the static dissipative and conductive plastics markets. Our products are marketed under the Real-Stat® brand. For more information on our products, please see: 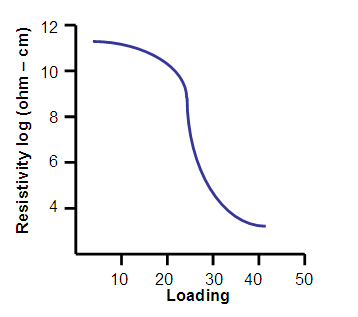